Time for the next installment from my review-a-thon from my massive Shiro birthday order.

In my order, I picked up two surprise baggies. Each baggie was $5 and contained 10 random eyeshadows. I asked for the “Surprise me – colorful” option, so my samples wouldn’t be only neutrals. They’d also have some nice colorful options as well.

I own quite a few Shiro eyeshadows, so I was thinking there would be a lot of overlap, but really, by magic, there was very little! In this order of 10, I only received two that I had already had. So, that’s pretty good!

Here’s what I got in this pack! Note: All swatches are over Darling Girl Glitter Glue on the left and NYX white base on the right. Also, closeups are full sun, for the most part.

Slave 23 – This is a golden-champagne color with lots of silver sparkles. The website says there are gold sparkles too, but I didn’t see those when I swatched this. This is a very wearable and versatile color. It’s not crazy interesting, but it is useful to round out a collection. It reminds me of Tea Tosh from Notoriously Morbid, except it’s more golden and doesn’t have the red sparkles. Definitely a good color to own. Also applies nicely – very smooth and creamy. 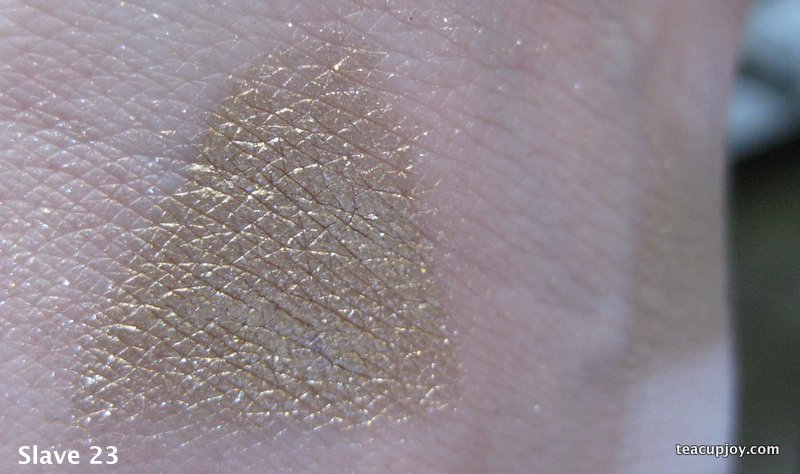 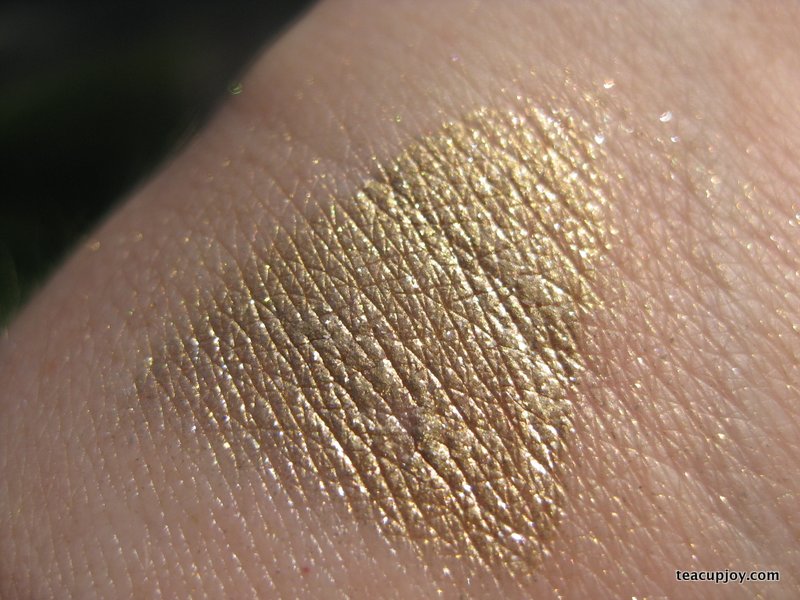 An Unexpected Party – This is a medium bark brown. It has green and gold sparkles. This color applies very smoothly and is nicely pigmented. Over no primer, it has a bit of a gold sheen to it. Over either a white or sticky base, it’s a darker copper-brown with a slight oliveness to it. Either way, this is a nice neutral and will work with a lot of different looks. 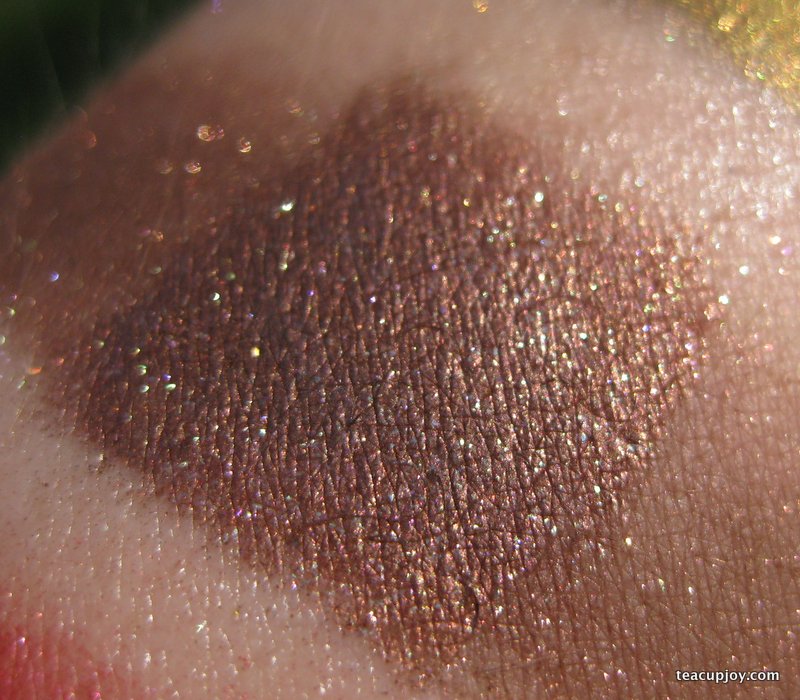 You Dropped Your Rod – This is a dark, warm bronze over a black base, but the copper is so strong that you barely notice the black base. It’s got some lovely copper sparkles, so it makes this a bright, but still sexy color. I hate to use the word sexy to describe this though, given the name… anyway, it reminds me like a deeper version of Mockingjay.

Smashing Pots – This color is a brown-wine color with a copious amount of sparkles, which is fun. I definitely see the green and red sparkles. I didn’t see the blue, though. What’s so impressive with this particular eyeshadow is that the sparkles aren’t all that much diminished by the lack of base. It’s still so sparkly!

Champion – At first when I swatched this, I was thinking that this was a blush. But then I looked it up, and it’s definitely not. To me, this is an orange-red with a subtle (almost not noticeable) blue sheen. The website description says a pink sheen, but I really don’t see it. 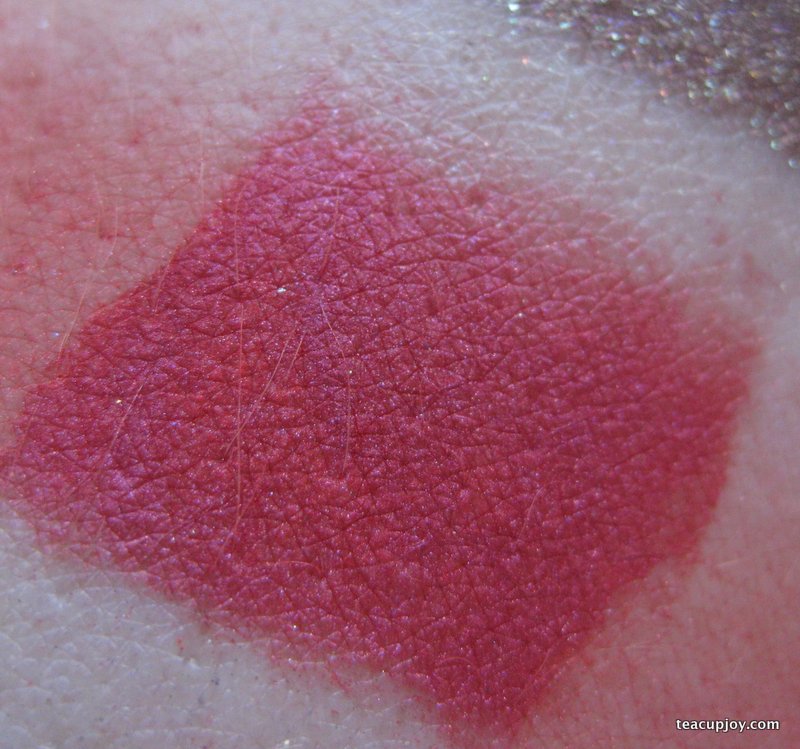 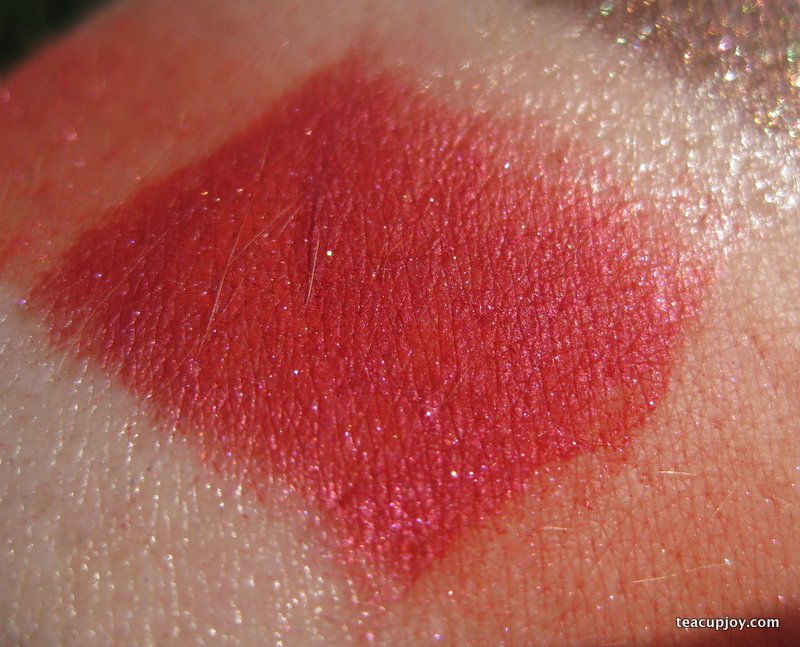 Fullmetal – This one was the surprise of the bunch. I was expecting a charcoal gray. Instead to my eye, this is dark purple-gray with gold, red, and copper sparkles. A nice color, but definitely more purple than gray… 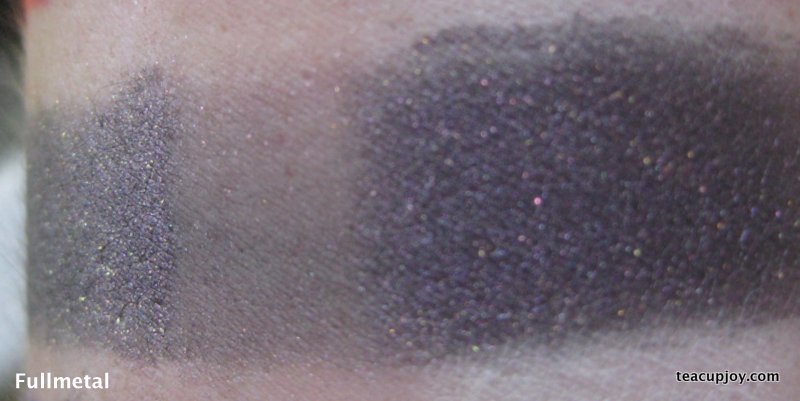 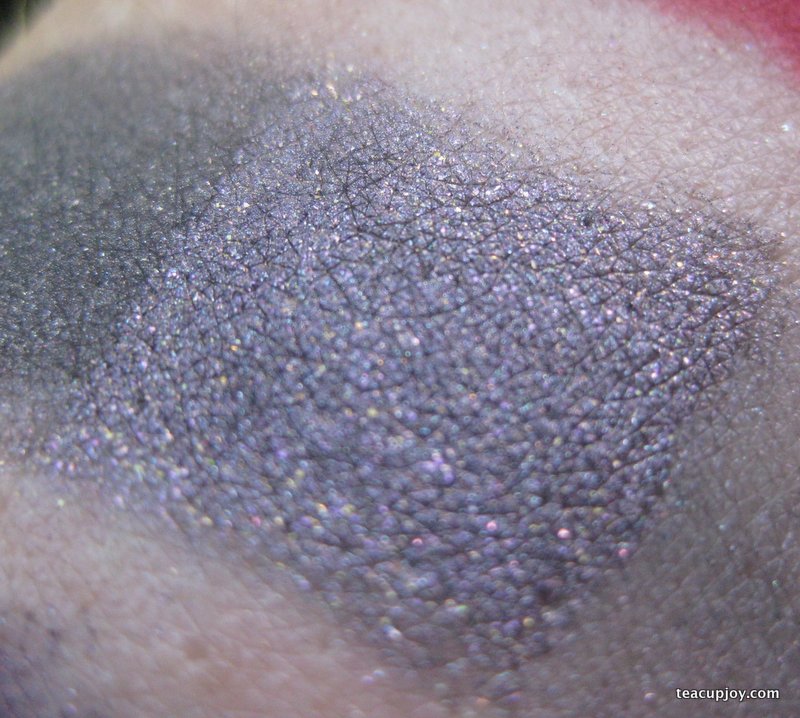 I Understood That Reference – This color has a deep blue matte base. Over glitter glue or base, it’s a red-bronze, which is a lovely color. The problem with this color for me though is that it was super powdery and extremely patchy. I tried re-swatching it, and it didn’t work any better. Shame, since I am trying to get more brave with wearing blues. Look at the carnage below. Sad about the patchiness. 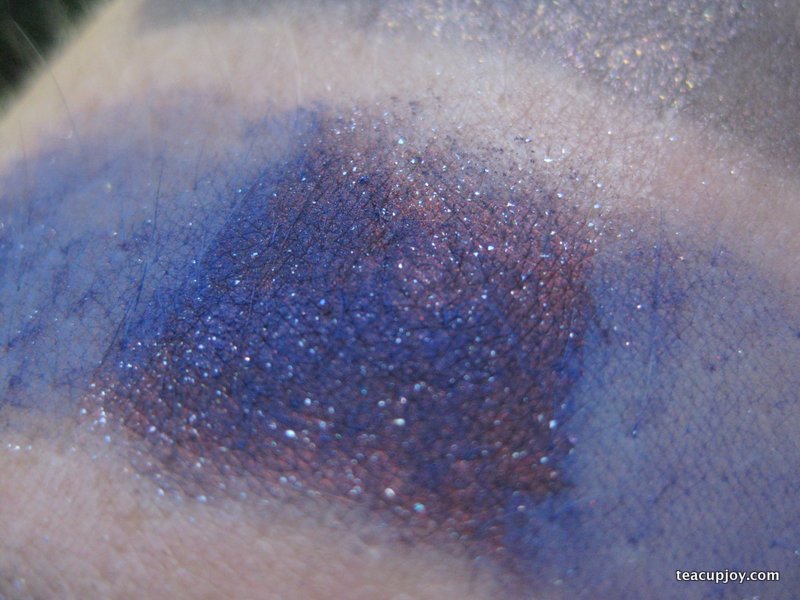 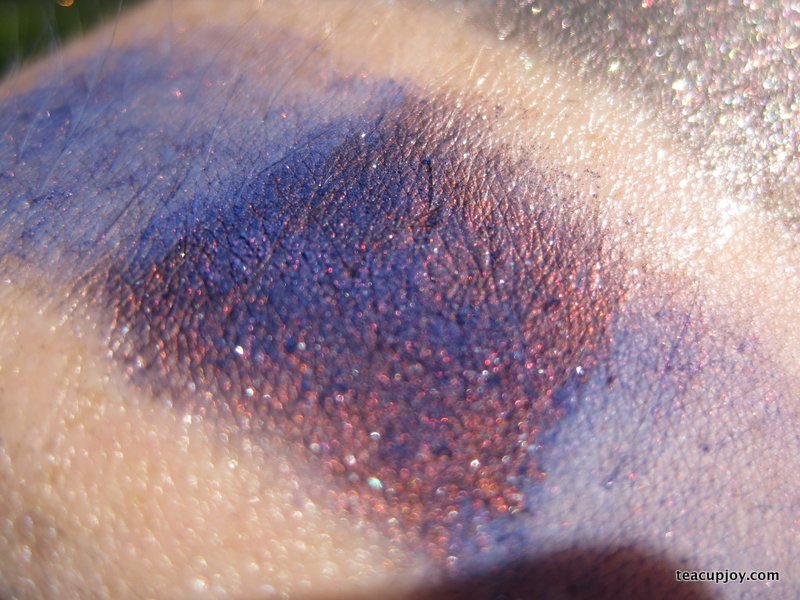 Attercop, Attercop – I’ve always been curious about this color, but I have never had the guts enough to purchase it. First of all, its got a black base which I don’t like. Also, it’s blue, which I stay away from. Also, it requires a sticky base to do anything with, and while I swatch with a sticky base to get an idea of the potential of the color, I rarely actually use it in a look, since it’s such a pain in the ass. That said, I really like this color. It’s a black base with beautiful turquoise sparkles. It reminds me of the beach at night, which is very intriguing. I may not be brave enough to wear this as an eyeshadow, but I can see myself wearing it as a liner for sure! 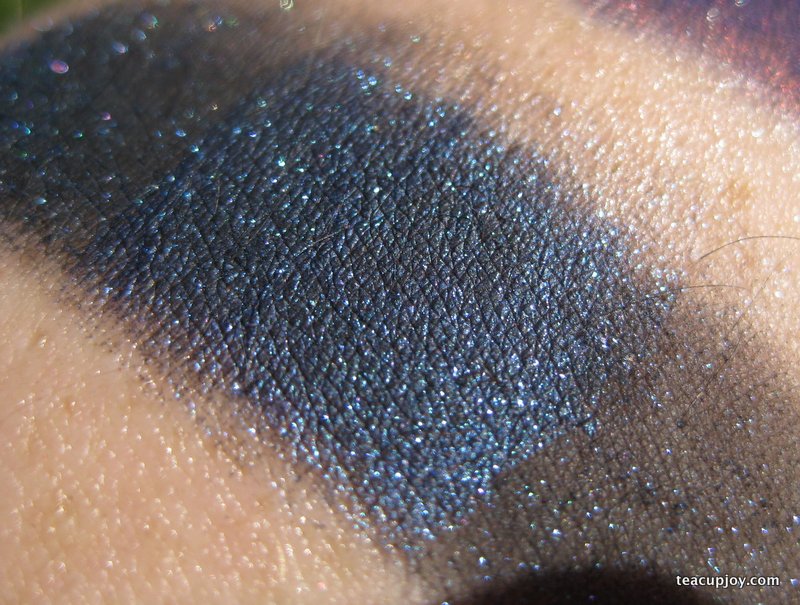 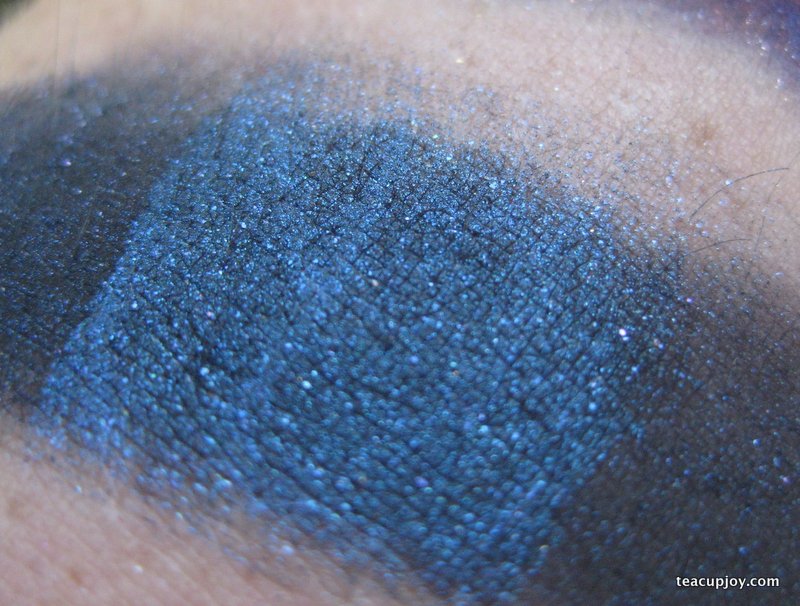 Also included was Huntress and Master of Whispers. I’ve already swatched and reviewed those, so I’ll just link to them.

Overall, my colorful mix had a lot of neutrals. But I can’t complain since 80% of what I got was new to me! I love that Shiro offered the surprise packs. I absolutely love surprises!

I have one more surprise pack to review, so I’ll swatch those up and post! Fun times!